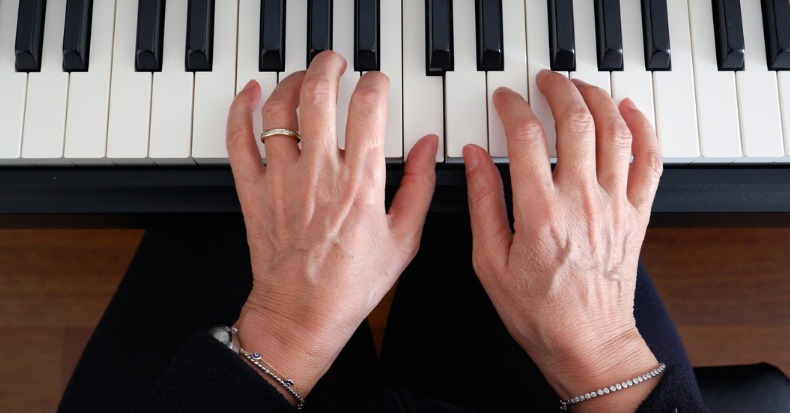 There are many jobs that place people at risk for carpal tunnel syndrome (CTS), but we bet you wouldn’t have thought of musicians. First and most important, we don’t want to scare anyone from playing a musical instrument as many of us find music to be a very important release mechanism or an escape from reality (at least for a while) in our busy lives. Playing music utilizes part of the brain that doesn’t get enough stimulation and it has been found to improve learning skills in children and can improve (as well as possibly prevent) Alzheimer’s Disease in the more mature sector of the population. So PLEASE, continue playing your instrument or if you don’t play, start taking lessons on your favorite instrument – something an increasing number of adults are beginning to do!

Okay, now that the “disclaimer” is over, we can discuss why musicians are at risk for developing CTS and how you can prevent CTS from becoming a problem for you. Playing a musical instrument utilizes the fingers in a rapid, repetitive way, similar to a typist or keyboard worker. Also, some instruments require the hands and wrists to be placed in awkward positions, which is bad because the tendons, as they rub against each other inside the carpal tunnel, create friction, heat and swell up, thus pinching the median nerve. If the wrist is bent, the pressure inside the carpal tunnel goes up a lot more than when it’s kept straight, and this is especially true if there are already problems present like a mild case of CTS. In brief , the anatomy of the carpal tunnel includes 9 tendons, some blood vessels, and the median nerve which are, in a sense, jammed into a tight, confined space. Think of pulling a napkin through a napkin ring that is just a little bit too small – you REALLY have to work to pull the napkin through, right? Well, this is kind of what happens when one develops CTS. Instead of having a napkin and ring that match so the napkin easily pulls through, those with CTS have a tight, constricted tunnel (napkin ring) which really squeezes the contents, including the median nerve. The result of pinching a nerve is numbness, tingling, burning, and/or a “half-asleep” feeling in fingers 2, 3, and 4 (that is, the index, middle and ring fingers).

When you watch a piano player, their palms are pointing down towards the floor while they play. The two long bones in the forearm, the ulna and radius, are parallel when the palms are up and cross over one another when the palms are down. The median nerve travels down from the neck, axilla, upper and lower arm, and finally through the carpal tunnel to innervate the middle three fingers. There is more pressure on the median nerve when the palms are pointing down compared to up, but it would be impossible to play the piano palms up! Other instruments like the flute, trombone, and trumpet require the arms and hands to be raised up to around the head level while the instrument is played. This places more pressure on the median nerve in the axilla area, referred to as the thoracic outlet. Many musicians practice multiple hours a day and the repetitive motion can really irritate the median nerve, resulting in CTS.

Again, PLEASE do not stop playing your musical instrument! Rather, take multiple breaks when practicing, do carpal tunnel stretch exercises, and seek chiropractic care as a doctor of chiropractic can usually manage CTS successfully without the need for surgery.