Published on 1 March 2022 under Advanced 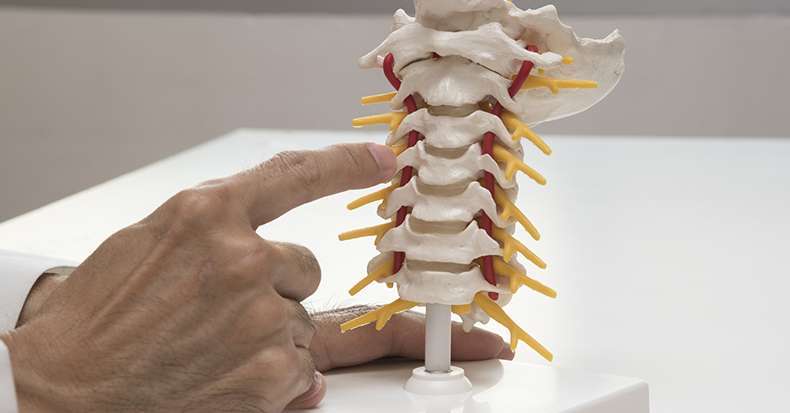 The Anatomical, Clinical,
and Management Distinctions

The Cervical Disc is
NOT a Mini Lumbar Disc

Most of what is understood and taught about the intervertebral discs was ascertained by studying the lumbar discs. The “era of the intervertebral disc” began in 1934 when William Jason Mixter and Joseph Seaton Barr read their paper, Rupture of the Intervertebral Disc with Involvement of the Spinal Canal, to the Annual Meeting of the New England Surgical Society (1). Dr. Mixter was then Chief of Neurosurgery at Massachusetts General Hospital and Professor of Neurosurgery at Harvard Medical School. Dr. Barr was then Orthopedic Surgeon to Outpatients at Massachusetts General Hospital. 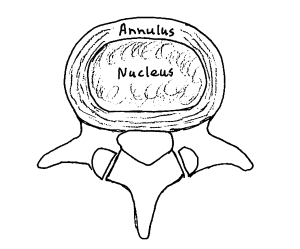 If any part of the annulus extends beyond the normal disc space, it is considered to be a bulging disc.

In the protrusion disc, the base of the displaced material is greater than the distance the disc material had moved towards the intervertebral foramen and/or the central neural canal. 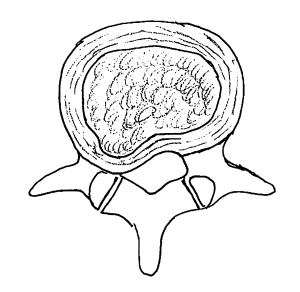 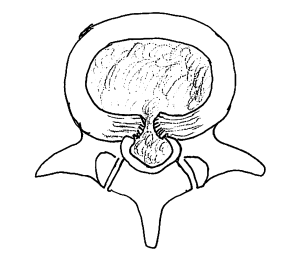 This nomenclature of the intervertebral disc is dependent upon a distinct anatomical difference between the nucleus pulposus and the annulus fibrosis. 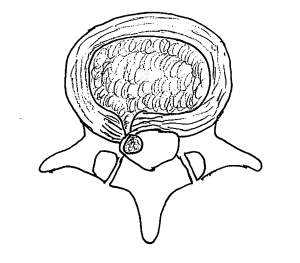 With age, the water content of the nucleus diminishes, and the nucleus gradually becomes much more like the annulus in consistency. As such, herniation of the intervertebral discs is much more common in youth and less common as people age. 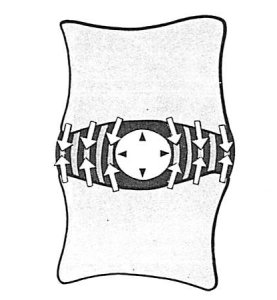 Also, with age, acute injury, or repetitive stress, the fibers of the annulus can degrade, allowing for the types of herniations shown above. When the nucleus moves in a posterior (backwards) direction, it may put pressure on the nerve root, the cauda equina, or the spinal cord (3, 4). 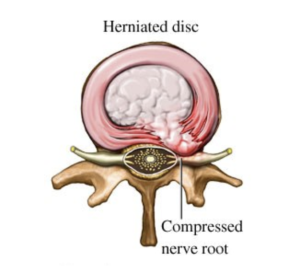 Although decompressive surgery is occasionally necessary, there is no doubt that spinal manipulation and chiropractic care is an effective conservative treatment for low back disc herniation with compressive neuropathology (5, 6, 7, 8, 9, 10, 11, 12, 13, 14).

Academics and clinicians often assume that the anatomy of the cervical intervertebral disc is similar, if not identical, to that of the lumbar spine. The cervical disc is often viewed as a small lumbar disc. Yet, dissension to this began to appear in the orthopedic literature more than 30 years ago.

Intervertebral Disc Changes
with Aging of Human Cervical Vertebra:
From the Neonate to the Eighties

The authors are from the department of Orthopaedic Surgery, Saitama Medical Center, Japan. They note that the “intervertebral disc is one of the most important structures in the maintenance of spinal function.” Yet, “histologic observations of the aging process of the cervical discs have been reported only in small numbers.”

Their study of the cervical discs used 155 human cadavers with ages ranging from six days to the ninth decade. The primary cause of death was cardiovascular disease. None of the subjects’ deaths were related to cervical spinal disease. All specimens were stained and evaluated histologically with an optical microscope. Special emphasis was given to the age changes in the nucleus pulposus.

The age groupings for the specimens were:

“The infantile type of nucleus pulposus, containing cells originating from the notochord and surrounded by a fine fibrous tissue, was replaced by the adult type with a firmer structure, composed of fibrocartilage and dense fibrous tissue at the first half of the second decade.”

“The adult nucleus pulposus is composed of fibrocartilage and fiber components, in distinct contrast with the gelatinous nature of the disc of childhood.”

In 1990, the journal Seminars in Arthritis Rheumatism published a study titled (16):

Anatomy and Physiology of the Cervical Spine

The primary author, John Bland, MD, was Professor of Medicine and Rheumatology at the University of Vermont College of Medicine (d. 2008, age 90 years).

Dr. Bland and colleague noted that the lumbar spine had been extensively studied since 1934, but that “the cervical spine had received far less attention.” They state:

“Anatomic, physiological, biochemical, and biomechanical characteristics of the lumbar spine are often presumed to apply to the cervical spine. The differences are far too extensive to warrant such an assumed correlation.”

This paper is based on 171 whole human spines they had studied anatomically, physiologically, and histologically. Their findings include:

“The nuclei pulposi of the cervical intervertebral discs, present at birth, are progressively less evident in adolescence, and by age 40 years have disappeared.”

“The adult disc is ligamentous-like, ‘dry,’ and composed of fibrocartilage, islands of hyaline cartilage, and tendon-like material, with little or no proteoglycans.”

“Thus, after age 40 years, it is impossible to clinically herniate the nucleus pulposus as there is none.”

Disorders of the Cervical Spine, Diagnosis and Management

In the second edition, published in 1994, Dr. Bland had expanded his 171 cervical spine specimen study to 191 specimens. He notes:

“The nucleus pulposus, present at birth, and remaining until age 9 to 14 years, is made of remnants of primitive notochord and proteoglycan material.”

“However, in the cervical spine, contrary to events in the lumbar spine, the nucleus pulposus gradually disappears.”

“In 191 whole human cervical spines, we found no evidence of a gel-like nucleus pulposus after age 45.”

“The intervertebral disc in the cervical spine is ‘dry,’ more like ligament than ‘disc,’ fibrous, and gradually breaking up in various sized pieces, seemingly a universal, probably physiological, development.”

The primary author, Susan Mercer, PhD, is from the Department of Anatomy and Structural Biology, University of Otago, Dunedin, New Zealand. The objective of this microdissection study was to determine the morphology of the human adult cervical intervertebral disc and its ligaments. The authors note that “a detailed three-dimensional description of the cervical intervertebral disc and its surrounding ligaments is currently unavailable.” This is concerning because “some studies indicate that the cervical disc is distinctly different from the lumbar intervertebral disc, yet most clinical and anatomic texts appear content with extrapolating data from the lumbar spine.”

“Fundamental to any appreciation of the mechanism causing injury to the cervical intervertebral disc is a knowledge of their normal structure.”

Using microdissection, the ligaments and the fibrous components of 59 cervical intervertebral discs were resected systematically. 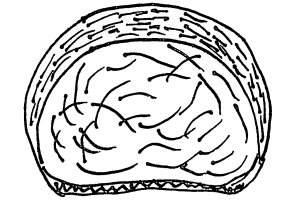 The authors discovered that the “nucleus” consisted of a “deep core of undissectable fibrocartilaginous material.” They state:

“The development of cervical discs is distinctly different from that of the lumbar discs. The nucleus at birth constitutes no more than 25% of the entire disc, not the 50% as in the lumbar discs.”

“With aging, the nucleus pulposus rapidly undergoes fibrosis such that by the third decade [20-30 years] there is barely any nuclear material distinguishable.”

“Readers may be startled as the investigators were by the results of this study: the structure of the cervical discs does not match the descriptions they have currently received in literature.”

“Skeptical individuals might argue that the current study was confounded by the use of elderly cadavers and that features observed were the consequence of degenerative or age-related changes. However, all of the specimens exhibited the same morphology including the sample taken from the 39-year-old individual and the two other individuals younger than 50 years of age.”

“The different anatomy of the cervical annulus fibrosis means that the model devised for lumbar discs cannot be applied to the neck. A separate and new model must be devised for the cervical discs.”

Nikolai Bogduk is a unique individual. As of January 2022, PUBMED, the search engine for the US National Library of Medicine, locates 302 articles using his name. Dr. Bogduk is currently Emeritus Professor of Pain Medicine at the University of Newcastle, NSW, Australia. Dr. Bogduk holds an MD, PhD, and ScD. In addition:

Dr. Bogduk is the most noted, respected, and influential clinical anatomist of our time, and perhaps of all history.

In 2012, the journal Radiological Clinics of North America published a study, authored by Dr. Bogduk, titled (19):

Degenerative Joint Disease of the Spine

“Cervical disks differ from lumbar disks in their anatomic structure and their expression of degenerative changes.”

“At a microscopic level, the structure and biomechanics of joints in the cervical spine and lumbar spines differ.”

“Cervical disks lack a concentric anulus fibrosus; the anulus is well developed only anteriorly, where it serves more as an interosseous ligament, and not as a circumferential constraint around the nucleus.”

“The nucleus pulposus is relatively small at birth and persists until the second decade of life [10-20 years], but thereafter it gradually disappears, leaving a firm, dry plate of fibrocartilaginous bulges and osteophytes.”

The studies presented here question the ability of the cervical disc to herniate and create compressive neuropathology, especially after the ages 20-40 years. In addition to these findings, there is good evidence that chiropractic spinal adjusting (specific line-of-drive manipulation) is both safe and effective for the management of cervical spine radiculopathy (20).

“Authored by Dan Murphy, D.C.. Published by ChiroTrust® – This publication is not meant to offer treatment advice or protocols. Cited material is not necessarily the opinion of the author or publisher.”