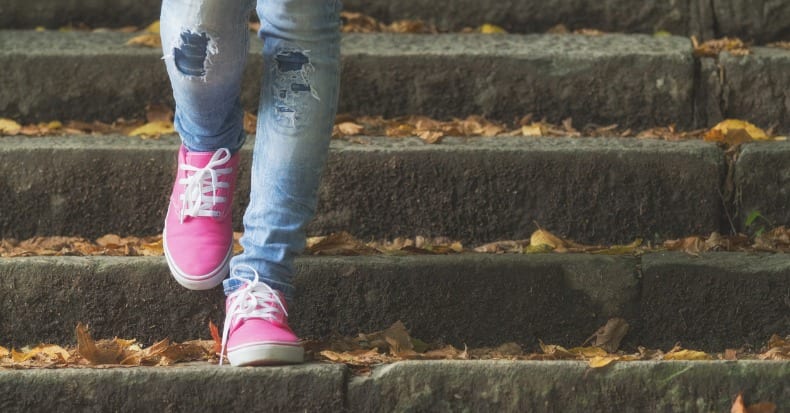 Patellofemoral pain (PFP) is commonly associated with running, jumping, squatting, and walking up/down stairs. It’s thought that PFP is caused by excessive rubbing between the back of the patella and groove, or track, that it rides in. Besides overuse, additional causes for PFP pain include muscle imbalance or weakness or direct trauma. The condition is most common in adolescents and young adults, usually due to overuse and/or misalignment, the latter of which is often referred to as poor “patellofemoral tracking.” This can eventually lead to arthritis, which is more commonly seen in older adults with PF pain.

Past research has demonstrated that issues in the foot can increase the risk for musculoskeletal pain in other parts of the body, including the knees. In a 2018 study, researchers examined the effect of knee-targeted exercise vs. a combined approach that included knee- and foot-focused exercise with foot orthotics (shoe inserts to correct pronation or the rolling inwards of the ankle and foot) in patients with patellofemoral pain.

Participants were instructed to perform terminal extension quad exercises that emphasized COMPLETE extension (straightening) of the knee. This exercise can be done sitting or lying on the back with a rolled-up towel behind the knees (with or without an ankle weight) and fully flexing the quad muscles for three to five seconds and repeating the process ten to twenty times, as tolerated.

The results revealed a significantly greater improvement in the group that included foot care, supporting the conclusion that better outcomes are achieved by combining foot exercise and foot orthotics with knee exercises. The authors reported that the benefits were still present four months after the conclusion of care but not a year, suggesting the importance of continuing exercise and foot orthotic use.

Doctors of chiropractic routinely perform posture assessments when examining patients with knee pain in order to identify dysfunction in the hip or feet that may contribute to their chief complaint.